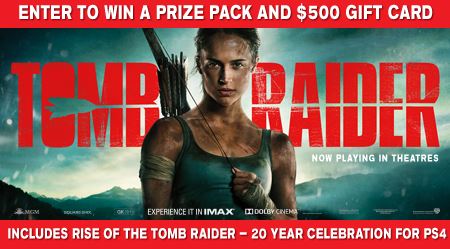 Enter the EB Games Tomb Raider Contest for your chance to win passes to see the Tomb Raider movie or the grand prize consisting of a copy of Rise of Tomb Raider – 20th Anniversary for PS4 and a $500 EB Games Gift Card.

Contest is open to legal residents of Canada (excluding Quebec) who have reached the age of majority at the time of entry.

Fill out the entry form with your name and email addrss and answer the skill-testing question. Agree to the rules and submit the form to get one entry.

Secondary prize (30 winners):
- One Run of Engagement pass to see Tomb Raider at Cineplex Theatres, valid for admission for two.

The potential winners will be selected through a random drawing on or about Monday, March 19th, 2018.