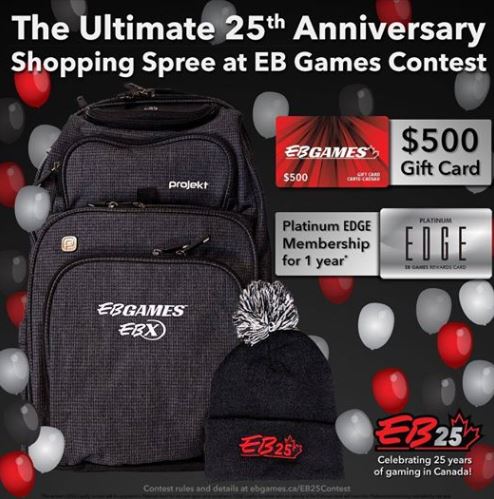 EB Games just published their 25 Years of Gaming Contest on Facebook, enter for a chance to Win the Ultimate 25th Anniversary Shopping Spree.

This contest is open only to legal residents of Canada (excluding residents of Quebec) who are at least the age of majority in the province or territory in which they reside.

To enter you need to visit and like the official EB Games Canada Facebook page, then locate the post promoting this contest, like it, share it and in the comments section write the name of your all-time favourite video game character tagging a friend.

Contest closes on Sunday, November 11, 2018.  Winner will be selected by random drawing from all valid entries.

There is one Grand Prize available to be won, consisting of one $500 EB games gift card, one EB games Back Pack, one EB Games Platinum membership and one EB25 branded hat.

There are also 24 second prizes to be won, consisting of an EB Games platinum membership and one EB25 branded hat.

The random draw will take place on Monday, November 12, 2018. Winner will be notified by Facebook DM.