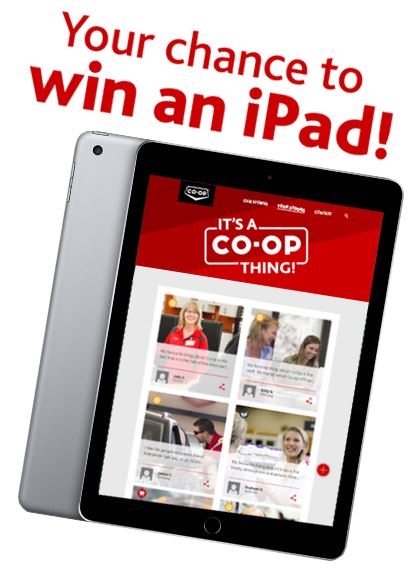 Enter the Co-op Stories Contest for your chance to win one of the four 32GB iPads.

Contest is open only to residents of Manitoba, Saskatchewan, Alberta, British Columbia, the Kenora District in Nothwestern Ontario and Yellowknife in the Northwest Territories who have reached the age of majority.

Go to the official page of the contest at coopstories.ca and click the “Contest” button at the top of the page.

Then, fill out the entry form with your name, email and postal code. Agree to the contest rules and submit the form to earn your entry.

Contest closes on October 29, 2017. A random draw will be conducted to select the winners from among all elegible entries.

A random draw for each of the prizes will be conducted on November 1, 2017 from among all elegible entries received during the contest period.